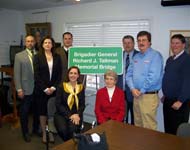 As more veterans come forward and tell their stories of service, we – children and adults alike – learn a great deal about endurance, sacrifice, courage, and principles. What they relate as unremarkable actions and perspectives we see as exceptional deeds and inspirational lessons. We are reminded how many authentic American heroes we have among us.

When Joe McGraw suggested that the Center Street Bridge be named after Brigadier General Richard J. Tallman, I instantly committed to pushing the legislation needed to accomplish it. Representatives Sandy Major and Mike Peifer immediately pledged their support in the House.

Pennsylvania has become fond of naming highways and bridges after renowned military units and courageous military personnel. It is a tradition worth keeping.

We hear references to the concept of service above and beyond the call of duty. General Tallman embodied it. To have an individual who fought in the Battle of the Bulge, who was in Korea, and who was still leading troops toward the end of the Vietnam War, is remarkable. His loss took away someone loved by his family, respected by his neighbors, and needed by our nation. 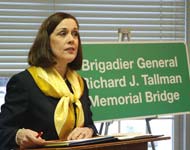 The extensive military record of General Tallman, his dedication and leadership qualities, and the values he instilled in his family, are things to be long remembered. This bridge will serve as a special monument to his memory, of an extraordinary career and a life given on the frontlines. Our community will honor one of its finest warriors with this designation.