HARRISBURG – Sen. Lisa Baker welcomed Wallenpaupack Area High School seniors Nick Hamer and Cory Prisco to the Senate and recognized their recent achievement of winning the National Automotive Technology Competition held in New York City. For the program, it is the second consecutive championship, and makes it three in five years for the Buckhorns.

The students, both from Blooming Grove Township, Pike County, were accompanied on their trip to Harrisburg by their parents and automotive technology teacher Dr. Mark Watson. They also met with Rep. Mike Peifer, R-139th, and Gov. Tom Wolf during their visit.

Wallenpaupack has now won nine state championships, which is more than any other school.

While the students won scholarships for their victorious showing, the school district also wins by receiving state-of-the-equipment so that future students in the program may also benefit.

Nick, who will be attending the Maine Maritime Academy where he will work on boat engines, said he and Cory were able to use equipment and programs the school’s past winners won and that aided them in competitions. He said he hopes the younger students in the program will be able to use whatever equipment the school gets from this win to their advantage going forward, but more than anything, he hopes the continued winning inspires and empowers future Wallenpaupack competitors to see it can be done.

“Wallenpaupack is extremely resourceful in fulfilling their educational mission. Student initiative is supplemented by considerable commitment on the part of teachers and administrators,” Baker, R-20, said. In addition to a supportive system at school, the senator said the students also have “a family that is involved and very supportive of their learning path.”

“It was a really cool experience,” said Cory, who will be attending Universal Technical Institute in Exton. He said the entire journey that’s taken him from Hawley to New York to Harrisburg has been fantastic. The team beat 35 others at the national competition after beating nine teams at the state level and five at the regional level.

The legislators praised the students and the program.

“These two young men deserve credit for their skill, their intensity, and their competitive spirit. Along the way they also acquired personal and life skills, such as the importance of teamwork,” Baker said.

“I’m so excited for the Prisco and Hammer families and so proud of Dr. Watson and the program’s ongoing success,” Peifer said. 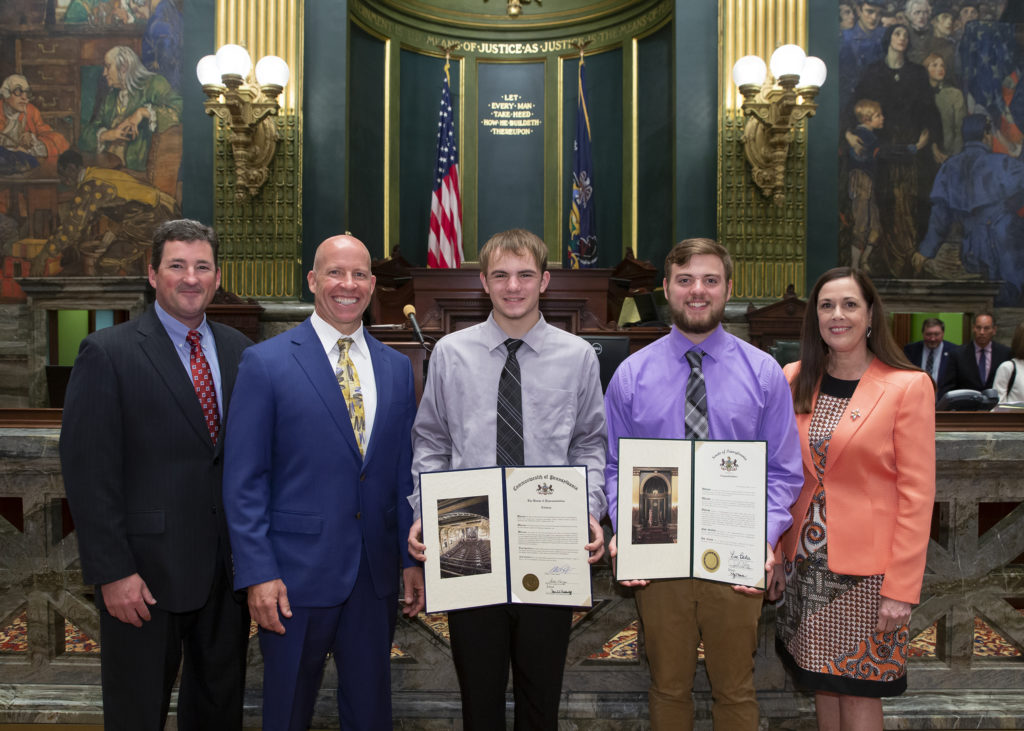