DALLAS – Sen. Lisa Baker, R-20th, recently had the chance to take our views and concerns to the White House after being invited to a policy forum involving top women serving in the Trump administration.

The White House Empowering Women Symposium provided an opportunity to learn about several of the president’s initiatives and examine some national issues with significant state and local impacts.

“They seem very committed to moving legislation that will help our area, from investing in infrastructure to combating the opioid crisis to better matching graduates and workers with good jobs,” she said.

During a brief stop, President Trump thanked participants for their input stating, “Women are half the population, but care about 100 percent of the issues.”

Baker was encouraged by the experience.

“There was a clear understanding that Washington does not have all the answers,” she said. “And a recognition that the federal government can help pave the way to productive action by engaging states and local communities.”

As the chair of the Senate Health and Human Services Committee, Baker said meeting Centers for Medicare and Medicaid Services Administrator Seema Verma was also a highlight.

“We had a positive discussion about how Pennsylvanians can benefit from changes being made at the federal level,” she said. “I am looking forward to hearing more of her ideas.”

Baker is hopeful the dialogue will continue.

“I was glad to be part of this conversation,” she added. “Any opportunity to learn from other female leaders and make connections that could prove helpful in problem-solving is productive for everyone.” 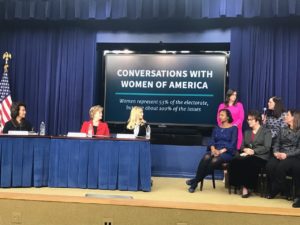 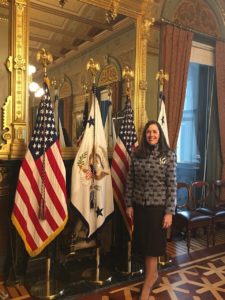 Standing with the flags displayed in the Vice President’s ceremonial office at the Eisenhower Executive Office Building. 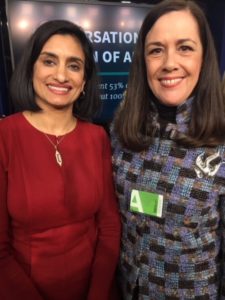 Sen. Baker had the chance to meet and discuss issues with Centers for Medicare and Medicaid Services Administrator Seema Verma while in Washington.