HARRISBURG – The Dallas Mountaineers, which captured the state’s 4A baseball title this year, paid a visit to the Capitol on Nov. 13. While there they met with Sen. Lisa Baker, an alumna of the school, who introduced the team in remarks from the Senate floor. They also had the opportunity to visit the Senate floor and pose for pictures with the senator. The team defeated South Park High School 5-0 in the title game played at Penn State’s Medlar Field. 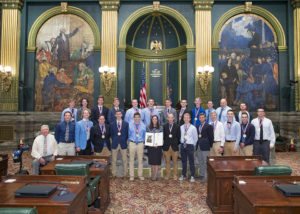